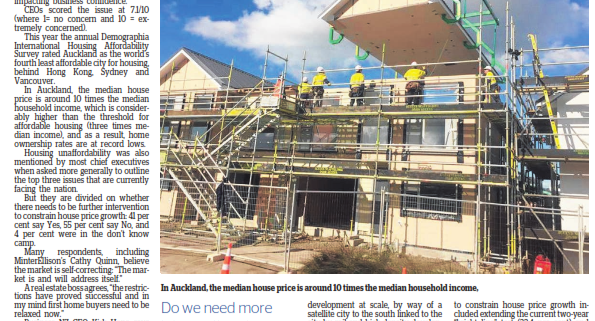 In Auckland, the median house price is around 10 times the median household income, which is considerably higher than the threshold for affordable housing (three times median income), and as a result, home ownership rates are at record lows.

Housing unaffordability was also mentioned by most chief executives when asked more generally to outline the top three issues that are currently facing the nation.

But they are divided on whether there needs to be further intervention to constrain house price growth: 41 per cent say Yes, 55 per cent say No, and 4 per cent were in the don’t know camp.

Many respondents, including MinterEllison’s Cathy Quinn, believe the market is self-correcting: “The market is and will address itself.”

A real estate boss agrees, “the restrictions have proved successful and in my mind first home buyers need to be relaxed now.”

Business NZ CEO Kirk Hope says funding and demand factors must be aligned to ensure development can occur. “Measures to constrain demand do not fix the problem, they may provide more time to increase supply whilst restraining house price inflation,” he says.

When asked the best way to constrain house price growth, the top three options were: funding a major Government housing programme to provide affordable housing in Auckland – favoured by 50.5 per cent, bringing in a Vancouver-style foreign property buyers tax/stamp duty on all residential property transactions in Auckland (48.6 per cent) and giving urban authorities power to bypass local politicians to ensure new supply (40.0 per cent).

Infrastructure New Zealand CEO Stephen Selwood believes current Auckland plans allowing house construction to occur throughout the city have been a failure. “We need urban development at scale, by way of a satellite city to the south linked to the city by rail and high-density development centred on rail and busway stations,” he says. “The faster we build houses on current plans the worse our transport system will become.”

“As both Bill English and Phil Twyford understand (and of course David Seymour), the outrageous prices of housing in most New Zealand cities are a direct result of restraints on the availability of land, and the way we have chosen to fund infrastructure,” says ICBC chairman Don Brash.

A major banking boss remarked: “The current LVR restrictions have seen many mum and dad investors leave the Auckland market, which is good. First home buyers have come back into the market in the suburbs that were having their prices increased previously by those investors.”

Some of the lowest scoring options to constrain house price growth included extending the current two-year “bright line” test (32.4 per cent) and introducing a capital gains tax (27.6 per cent) – both of which are likely outcomes of a tax working group under a Labour-led government.

This year’s survey reveals that retaining workers due to housing affordability is becoming of increased concern (43 per cent of the CEOs responded yes, compared to 39 per cent last year).

Although most said it is only an issue in Auckland and Queenstown, several said they anticipated this would be an increasing concern in coming years.

Mood of the Boardroom: The Game Changer (NZ Herald)

Mood of the Boardroom: A tale of two report cards (NZ Herald)
Scroll to top