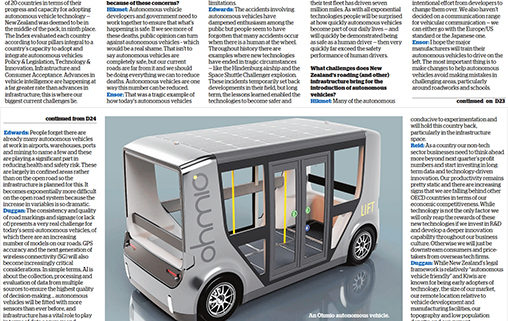 The Herald spoke to industry leaders to understand the AI opportunities for New Zealand, and what it could mean for the future of our roads and infrastructure.

How prepared is NZ for artificial intelligence on its roads and other infrastructure?

Hikmet: Prepared? It’s already out there and has been for decades! Adaptive braking, parallel parking assistance, lane-keeping systems, driver fatigue sensors, adaptive traffic control systems. There is so much artificial intelligence already around you and not just on the roads.

Ensor: It is hard to prepare when there is so much uncertainty around what changes artificial intelligence will create. We need to wait before making bets on which emerging technologies will dominate.

Duggan: KPMG’s 2018 Autonomous Vehicles Readiness Index (AVRI) made some interesting headway in this regard, examining a cross-section of 20 countries in terms of their progress and capacity for adopting autonomous vehicle technology — New Zealand was deemed to be in the middle of the pack, in ninth place. The Index evaluated each country according to four pillars integral to a country’s capacity to adopt and integrate autonomous vehicles: Policy & Legislation, Technology & Innovation, Infrastructure and Consumer Acceptance. Advances in vehicle intelligence are happening at a far greater rate than advances in infrastructure; this is where our biggest current challenges lie.

There have been some recent scares involving autonomous vehicles – notably the Uber accident in Arizona that killed a pedestrian. Will momentum slow because of these concerns?

Edwards: The accidents involving autonomous vehicles have dampened enthusiasm among the public but people seem to have forgotten that many accidents occur when there is a human at the wheel. Throughout history there are examples where new technologies have ended in tragic circumstances — like the Hindenburg airship and the Space Shuttle Challenger explosion. These incidents temporarily set back developments in their field, but long term, the lessons learned enabled the technologies to become safer and obstacles were overcome.

Reid: We still think of autonomous vehicles as something novel and new — however in the US, Alphabet-owned Waymo recently announced their test fleet has driven seven million miles. As with all exponential technologies people will be surprised at how quickly autonomous vehicles become part of our daily lives — and will quickly be demonstrated being as safe as a human driver — then very quickly far exceed the safety performance of human drivers.

What challenges does New Zealand’s roading (and other) infrastructure bring for the introduction of autonomous vehicles?

Hikmet: Many of the autonomous vehicles being built for the road are being trained and designed for driving on the right-hand side — it’s not a completely trivial task to convert them and will require intentional effort from developers to change them over. We also haven’t decided on a communication range for vehicular communication — we can either go with the Europe/US standard or the Japanese one.

Ensor: I hope the major manufacturers will train their autonomous vehicles to drive on the left. The most important thing is to make changes to help autonomous vehicles avoid making mistakes in challenging areas, particularly around roadworks and schools.

Edwards: People forget there are already many autonomous vehicles at work in airports, warehouses, ports and mining to name a few and these are playing a significant part in reducing health and safety risk. These are largely in confined areas rather than on the open road so the infrastructure is planned for this. It becomes exponentially more difficult on the open road system because the increase in variables is so dramatic.

Duggan: The consistency and quality of road markings and signage (or lack of) presents a very real challenge for today’s semi-autonomous vehicles, of which there are an increasing number of models on our roads. GPS accuracy and the next generation of wireless connectivity (5G) will also become increasingly critical considerations. In simple terms, AI is about the collection, processing and evaluation of data from multiple sources to ensure the highest quality of decision-making … autonomous vehicles will be fitted with more sensors than ever before, and infrastructure has a vital role to play in terms of data accuracy and processing speeds. Developments in autonomy and electrification have traditionally taken place in parallel, but their paths have now converged to the extent it’s now widely accepted there won’t be a fully autonomous vehicle that isn’t also electric, so charging infrastructure will have a key role to play by default.

What opportunities would the introduction of autonomous vehicles bring to New Zealand? How could their introduction influence future infrastructure?

Hikmet: The introduction of autonomous vehicles (not just autonomous cars) will allow many people to regain a sense of freedom and independence that they may have lost or never had. Autonomous vehicles also mean you won’t need to invest in close parking, you can instead turn that space into something more productive. I’m certain that the first urban generation who won’t need a driver’s licence has already been born in New Zealand.

Ensor: Autonomous vehicles give greater travel opportunities for people who currently rely on others to drive them or who use public transport. Demand for infrastructure may increase if this makes it easier to travel in a car by yourself.

Reid: The AI Forum’s recent report Artificial Intelligence – Shaping a Future New Zealand identifies a long list of AI applications which could benefit New Zealand across many sectors: agriculture, finance, tourism as well as the growing tech export sector. In the context of infrastructure, here are just a few ideas:

Personally, I reckon there’s an opportunity for autonomous “swarm bots” in the infrastructure sector — for example a swarm of little earth moving robots controlled by a “hive mind”could deliver all sorts of potential improvements for output, speed, precision, energy efficiency and safety. You heard it here first.

Duggan: Courtesy of features such as intelligent cruise control, steering support with ‘lane keeping’ technology and Autonomous Emergency Braking, the ‘semi-autonomous’ vehicles on our roads today have already begun to have a positive impact by reducing the frequency and severity of accidents. It’s no coincidence that autonomous vehicles have become increasingly topical at a time when in major cities around the world populations are outgrowing infrastructure, air quality is deteriorating, traffic accidents have become a global health issue and commute times continue to increase. Whether in London, Shanghai, Sydney or Auckland, fully autonomous vehicles are geared towards improving the productivity, sustainability, efficiency and safety of our daily commute.

Downstream, there’s no question that the advent of fully autonomous vehicles will influence social behaviour in relation to mobility, which will in turn influence the layout of our cities.

Is there an opportunity for New Zealand to propel itself to the forefront in this area?

Ensor: With the amount of money being invested in research by major global companies, New Zealand needs to look our skills in “making things happen”. We could focus on removing specific technological barriers that vehicles will face driving in countries like New Zealand.

Edwards: I am concerned that the wheels of decision making turn too slowly here. NZ has some great minds working on AI development, robotics and so on, but in the technology world, you need an entrepreneurial mindset where you are allowed to experiment and sometimes fail in the interests of learning. In this country we tend to debate policy and regulation over months and sometimes years, by which time key opportunities can be lost. When it comes to infrastructure, our low tax base means that financial commitments to major infrastructure projects will be scrutinised and held up by competing priorities. New Zealanders (and the media) can be very intolerant of false starts and prototype failures, which is not conducive to experimentation and will hold this country back, particularly in the infrastructure space.

Reid: As a country our non-tech sector businesses need to think ahead more beyond next quarter’s profit numbers and start investing in long term data and technology-driven innovation. Our productivity remains pretty static and there are increasing signs that we are falling behind other OECD countries in terms of our economic competitiveness. While technology is not the only factor we will only reap the rewards of these new technologies if we invest in R&D and develop a deeper innovation capability throughout our business culture. Otherwise we will just be downstream consumers and price-takers from overseas tech firms.

Duggan: While New Zealand’s legal framework is relatively “autonomous vehicle friendly” and Kiwis are known for being early adopters of technology, the size of our market, our remote location relative to vehicle development and manufacturing facilities, our topography and low population density, and our current infrastructure are all barriers which will prevent New Zealand positioning itself at the forefront of autonomous vehicle testing and implementation. It’s critically important that we keep up in terms of investment in infrastructure — which will have far broader benefits than for autonomous vehicles alone — and there’s no question that the vehicle technology available to us is advancing at a greater rate than ever before, but I’m not convinced there’s a need for New Zealand to adopt a leadership position in this regard.

What other areas of artificial intelligence do you think will influence New Zealand’s infrastructure development?

Hikmet: Machine learning and computer vision will help with analytics: counting pedestrians or telling you how busy a road is, how many vehicles are on it, and how fast they’re going. You can then use that generated data for analytics and predictive modelling. If urban planners and transport operators are more aware of what impact different decisions (be it infrastructure or policy) will have, they will make better choices to bring about the change that’s really needed for their specific communities.