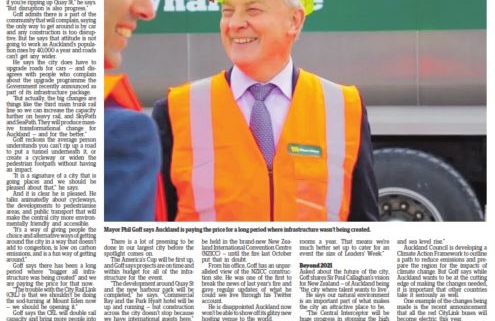 Auckland Mayor Phil Goff says although you can mitigate against disruption, you cannot “do” construction without it being in some sense disruptive.

Goff admits there is a part of the community that will complain, saying the only way to get around is by car and any construction is too disruptive. But he says that attitude is not going to work as Auckland’s population rises by 40,000 a year and roads can’t get any wider.

He says the city does have to upgrade roads for cars — and disagrees with people who complain about the upgrade programme the Government recently announced as part of its infrastructure package.

“But actually, the big changes are things like the third main trunk rail line so we can increase the capacity further on heavy rail, and SkyPath and SeaPath. They will produce massive transformational change for Auckland — and for the better.”

Goff reckons the average person understands you can’t rip up a road to put a tunnel underneath it, or create a cycleway or widen the pedestrian footpath without having an impact.

“It is a signature of a city that is going places and we should be pleased about that,” he says.

And it is clear he is pleased. He talks animatedly about cycleways, the developments to pedestrianise areas, and public transport that will make the central city more environmentally friendly and accessible.

“It’s a way of giving people the choice and alternative ways of getting around the city in a way that doesn’t add to congestion, is low on carbon emissions, and is a fun way of getting around.”

Goff says there has been a long period where “bugger all infrastructure was being created” and we are paying the price for that now.

“The trouble with the City Rail Link (CRL) is that we shouldn’t be doing the sod-turning at Mount Eden now — we should be opening it.”

Goff says the CRL will double rail capacity and bring more people into the CBD by public transport.

“That was needed five years ago, and the reluctance of the government of the day to participate in that and then putting half the cost on Auckland … almost everybody can now see it was a bad mistake.”

The number of pedestrians on Queen St has roughly doubled in the past five years, the imminent opening of Commercial Bay is going to bring around 10,000 workers into one block, and we are seeing increasing numbers of cruise ships arriving into the city.

Goff asks: “How do you have all of that and have access by people to actually enjoy the city if it is still going to be a place that you drive through, rather than come into?”

A city under the spotlight

Adding to Auckland’s disruption is the preparation for 2021. It is shaping up to be one of Auckland’s busiest and most visible years ever — with the America’s Cup and Apec headlining the year, and other large major events including kapa haka festival Te Matatini, the women’s cricket world cup and the men’s world softball championship.

There is a lot of preening to be done in our largest city before the spotlight comes on.

The America’s Cup will be first up, and Goff says projects are on time and within budget for all of the infrastructure for the event.

“The development around Quay St and the new harbour park will be completed,” he says. “Commercial Bay and the Park Hyatt hotel will be up and running — but construction across the city doesn’t stop because we have international guests here.”

He says as well as the excitement and vibrancy the America’s Cup brings to the city, it also leaves some valuable legacy products — including the strengthening of the wharf, the removal of the hazardous substance tanks, installation of breakwaters, and replacement of the Daldy St stormwater outfall.

New Zealand’s hosting of Apec will involve a full year, with clusters of meetings held over 12 months from December 2020, culminating in the Leaders’ Week and CEO Summit in November 2021. For that, around 10,000 attendees will descend on Auckland, with leaders from most of the 21 economies expected to attend.

The CEO Summit was intended to be held in the brand-new New Zealand International Convention Centre (NZICC) — until the fire last October put that in doubt.

From his office, Goff has an unparalleled view of the NZICC construction site. He was one of the first to break the news of last year’s fire and gave regular updates of what he could see live through his Twitter account.

He is disappointed Auckland now won’t be able to show off its glitzy new hosting venue to the world.

“When we watched the fire start and then just run on for day after day, it was pretty clear that this meant the centre wasn’t going to be ready for Apec, notwithstanding the fact it’s still 21 months away.

“But we did have a contingency plan between government and council, and we have alternative options including the Aotea Centre and others. We won’t have the brand new built-for-purpose convention centre, but Apec will be a success and it’s not the end of the world.”

Goff says preparations have delivered a lot of new hotel beds, including the 300-room Horizon Hotel being built alongside the convention centre.

“We’ve been building 1000 hotel rooms a year. That means we’re much better set up to cater for an event the size of Leaders’ Week.”

Asked about the future of the city, Goff shares Sir Paul Callaghan’s vision for New Zealand — of Auckland being “the city where talent wants to live”.

He says our natural environment is an important part of what makes the city an attractive place to be.

“The Central Interceptor will be huge progress in stopping the high level of wastewater overflows into the harbour every time it rains,” he says. The $1.2b wastewater tunnel will run 14.7km long and 4.5m wide from Grey Lynn to the Māngere Wastewater Treatment Plant.

It is due to be operating by 2025 and will help make Auckland’s waterways cleaner by cutting overflows by up to 80 per cent.

Goff frequently talks about his desire to increase Auckland’s resilience to climate change in order to “ensure a better world for our children and grandchildren”. It was one of the major platforms he campaigned on during last year’s election, along with clean transport and protecting the environment.

He says climate change is the biggest environmental threat the world faces, though he admits there is a stark difference between Auckland’s contribution to water quality and climate change.

Auckland Council is developing a Climate Action Framework to outline a path to reduce emissions and prepare the region for the impacts of climate change. But Goff says while Auckland wants to be at the cutting edge of making the changes needed, it is important that other countries take it seriously as well.

One example of the changes being made is the recent announcement that all the red CityLink buses will become electric this year.

“Black carbon is associated with health problems and has been found in Queen St at levels higher than in some major European and US cities, so it’s a priority for us to address this issue.”

In November 2017, Auckland joined 11 other cities in signing the C40 Fossil-Fuel-Free Streets Declaration, committing Auckland to buy only zero-emission buses from 2025.

But Goff says he’d like to bring that commitment forward.

“The capital cost of an electric bus is much higher. But the advantage is that over the lifetime of the bus, the running costs are half and it pays for itself over that time.”

He says the capital constraints of council means he is talking to the Government about the possibility of extending the feebate scheme to buses.

“Feebate is great for electric cars. I drive an electric car. But these buses are on the road for 18 hours a day — why wouldn’t you want to bring forward that conversion?”

Project Auckland: Lessons from ‘new towns’ of the past (NZ Hera...