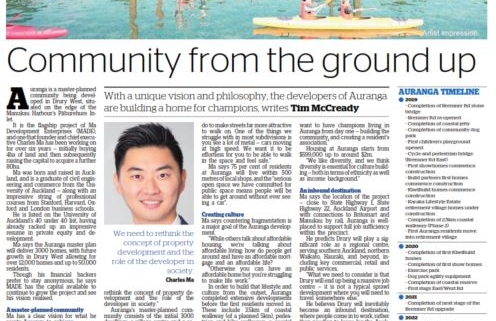 Auranga is a master-planned community being developed in Drury West, situated on the edge of the Manukau Harbour’s Pāhurehure Inlet.

It is the flagship project of Ma Development Enterprises (Made), and one that founder and chief executive Charles Ma has been working on for over six years — initially buying 4ha of land and then subsequently raising the capital to acquire a further 80ha.

Ma was born and raised in Auckland, and is a graduate of civil engineering and commerce from the University of Auckland — along with an impressive string of professional courses from Stanford, Harvard, Oxford and London business schools.

He is listed on the University of Auckland’s 40 under 40 list, having already racked up an impressive resume in private equity and development.

Ma says the Auranga master plan will deliver 3000 homes, with future growth in Drury West allowing for over 12,000 homes and up to 50,000 residents.

Though his financial backers prefer to stay anonymous, he says Made has the capital available to continue to grow the project and see his vision realised.

Ma has a clear vision for what he wants Auranga to achieve:
“My vision is an intensely personal one, emanating from my desire to add to human worth by creating places that foster and share social equity.”

What he says may sound idealistic, but it is obvious in the way he is designing Auranga that he truly believes it is possible. He says developing communities that have a positive impact on people’s sense of belonging, and that connect people, place and purpose, is at the core of his urban design philosophy.

“I’m a believer that we need to rethink the concept of property development and the role of the developer in society.”

Auranga’s master-planned community consists of the initial 3000 dwellings, a village centre and a retirement village. Other amenities include exercise spaces, playgrounds, a 5km coastal walkway and vast tracts of open space.

Ma’s passion for developing an ecosystem is evident in the detail. Auranga will have narrow single-laned roads, with median strips that are planted with trees. “We’re trying to create streets for people — not roads for cars,” he says, pointing to the wide footpaths, dedicated cycle ways and limited parking on streets.

“There are certain things you can do to make streets far more attractive to walk on. One of the things we struggle with in most subdivisions is you see a lot of metal — cars moving at high speed. We want it to be effortless for you to be able to walk in the space and feel safe.”

Ma says 75 per cent of residents at Auranga will live within 500m of local shops, and the “serious open space we have committed for public space means people will be able to get around without ever seeing a car”.

Ma says countering fragmentation is a major goal of the Auranga development.

“Otherwise you can have an affordable home but you’re struggling to make life work.”

In order to build that lifestyle and culture from the outset, Auranga completed extensive developments before the first residents moved in. These include 3.5km of coastal walkway (of a planned 5km), pedestrian and bike walkways, a coastal jetty for swimming and kayaking, exercise park, playground and a dog park. Auranga’s retirement village is now open, and toward the end of this month the first KiwiBuild residents are due to move in.

Ma says that usually in these sorts of developments you would expect affordable housing to be the last housing available.

But Made is rethinking this notion — even by name.

“We call it champion housing, not affordable housing,” he says. “We want to have champions living in Auranga from day one — building the community, and creating a resident’s association.”

“We like diversity, and we think diversity is essential for culture building — both in terms of ethnicity as well as income background.”

Ma says the location of the project — close to State Highway 1, State Highway 22, Auckland Airport and with connections to Britomart and Manukau by rail, Auranga is well-placed to support full job sufficiency within the precinct.

He predicts Drury will play a significant role as a regional centre, serving southern Auckland, northern Waikato, Hauraki, and beyond, including key commercial, retail and public services.

“What we need to consider is that Drury will end up being a massive job centre — it is not a typical sprawl development where you will need to travel somewhere else.”

He believes Drury will inevitably become an inbound destination, where people come in to work, rather than needing to leave for the Auckland CBD or elsewhere.

Planning for the future

Over the next five years, additional infrastructure projects planned for Auranga include a pre-school and primary school (2022), secondary school (2026), eco-islands (2023) and new railway stations (2024).

Ma says collaboration and openness with central and local government, iwi and communities has been key to bringing together and advancing the development. He says bringing everyone on board so that they buy into the vision he has for the development has been critical, and describes iwi as one of the project’s greatest champions.

Ma reckons if you start a project well, you have a greater chance of it ending well.

“For me, I’m passionate about starting well. After that, people just follow the culture.”

He hopes that Auranga will set the tone for what future developments in Drury, Auckland — and even around the world — could look like.

“I want to create a place that is so good, that it becomes a blueprint for future communities.”

Project Auckland: Lessons from ‘new towns’ of the past (NZ Hera...
Scroll to top