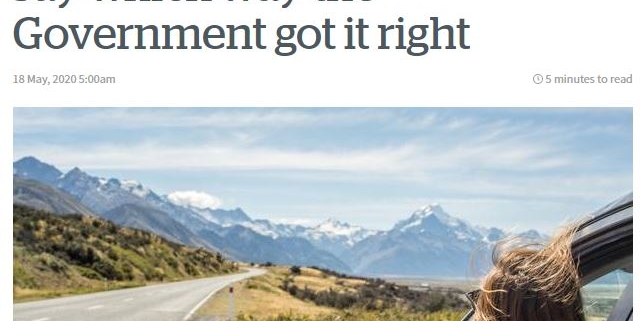 Business leaders have welcomed the cornerstone of the Government’s “once in a generation” Budget – the unprecedented $50 billion Covid-19 Response and Recovery Fund – rating it at 3.75/5 on an effectiveness scale.

The 52 respondents to the Herald’s business leaders post-Budget survey were asked to rate some big spending initiatives – such as the Covid-19 fund, health and education spend-ups, and investments in tourism, environmental and home building programmes on a scale of 1=5 where 1 equalled very poor and 5 equalled very effective.

The $50b fund was set up by Cabinet on April 6 and some $14b of initiatives, including the massive wage subsidy scheme, had already been spent before Finance Minister Grant Robertson unveiled last Thursday’s Budget.

The Budget included a further $16b from the fund to extend the wage subsidy, provide free trades training and boost infrastructure among other initiatives.

A further $20.2 left unallocated drew the ire of the National Opposition, who have called it an election bribe. “My only concern is the $20 billion slush fund,” Simplicity CEO Sam Stubbs said. “Unless this is spent quickly, it should more rightly belong in next year’s Budget and be the subject of better-costed policy announcements going into the election.”

A key part of the Government’s Covid response has been the wage subsidy scheme which provided companies $585.80 weekly for fulltime employees for 12 weeks, and, $350 weekly for part-timers. This was extended in the Budget for a further eight weeks at a cost of $3.2b. But conditions have been tightened so it is only available to businesses who have lost at least 50 per cent of revenue in the month preceding application.

A large fashion retailer boss said the 50 per cent loss threshold is too low, noting: “many businesses will perform better than that, but will still have significantly impaired performance and have to lose staff as a result.”

Spark CEO Jolie Hodson said it was positive to see $1.6 billion earmarked for trades and training and part of this should be directed to digital skills.

“It is important that we are thinking about the future of work in New Zealand and recognizing the need to build the capability of New Zealanders to be able to participate and thrive in an increasingly digital world,” said Hodson. “Covid has highlighted how critical this is, and we already know the productivity benefits it brings.”

Chapman Tripp Nick Wells said all the initiatives were stimulus of one sort or another. “We need to recover in a way that is fit for the future, learning from all of the benefits we have seen from the lockdown such as being more environmentally friendly, increased flexibility and ability to work from home being more digitised and having a much more weightless economy.”

The $400m domestic tourism sector relief package announced in the Budget was panned by many from a sector that directly employs over 229,000 people. Auckland Business Chamber CEO Michael Barnett said tourism was a $40b contributor.

“It deserved more and would have created employment.”

An agriculture boss added, “the investment in tourism needs to be seen for what it is – a start. This is one area where some reimaging would be good for the industry and New Zealand.”

The Government also revealed it would borrow $5b over the next four to five years to build 8000 state and transitional houses in partnership with housing providers. Business leaders scored the initiative 3.4/5.

“As long as (Phil) Twyford stays very far away from the project,” cautioned a wine exporter. A retail chief added: “Unsure on state house builds – there has been no tangible evidence of having good execution with KiwiBuild etc.”

The $1.1b package to create 11,000 jobs in the environment sector – from pest control to wetland restoration – received a score of 3.27/5, with some sceptical of its merits: “It is worthy but unlikely to attract the numbers of unemployed workers to make a difference,” suggested a food producer boss.

The $1b allocated to support education services received a score of 3.83/5 from respondents.

An executive in the transport industry says the package is worthy, but is missing “any mention of digital technology, which seems a missed opportunity following the recent experience of remote learning.”

Perhaps unsurprisingly, the $6.3b investment in health received the highest score from executives of all the Budget areas surveyed with 3.98/5.

“Covid-19 showed that our health system was not up to responding which was one of the reasons for the severe lockdown,” said independent director Cathy Quinn. “The money needs to be spent wisely so that in another pandemic our system is better able to respond.”

“Health needs much more than money, without a complete review and overhaul how much of the $6.3b will be wasted?,” asked a banking boss.