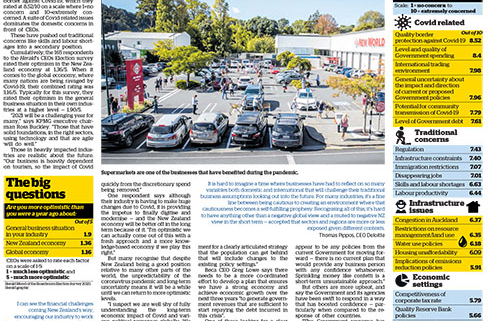 Confidence has plunged in the 2020 Mood of the Boardroom survey to the lowest levels seen since the  Herald began surveying the nation’s leading chief executives.

CEOs are particularly concerned about the maintenance of a strong border against Covid-19, which they rated at 8.52/10 on a scale where 1=no concern and 10=extremely concerned. A suite of Covid-related issues dominates the domestic concerns in front of CEOs.

These have pushed out traditional concerns like skills and labour shortages into a secondary position.

Cumulatively, the 165 respondents to the Herald’s CEOs Election survey rated their optimism in the New Zealand economy at 1.36/5. When it comes to the global economy, where many nations are being ravaged by Covid-19, their combined rating was 1.16/5. Typically for this survey, they rated their optimism in the general business situation in their own industries at a higher level — 1.90/5.

“2021 will be a challenging year for many,” says KPMG executive chairman Ross Buckley. “Those that have solid foundations, in the right sectors, using technology and that are agile will do well.”

Those in heavily impacted industries are realistic about the future. “Our business is heavily dependent on tourism, so the impact of Covid will be significant,” says one CEO.

However, there are pockets of optimism from those who have seen an increase in business resulting from the crisis, such as shipping and logistics firms — they point out reduced commercial aviation “means more demand for our services”.

Another beneficiary of the pandemic has been grocery retailers. Foodstuffs North Island CEO Chris Quin says: “We are privileged to be in an in-demand category, but New Zealand can’t replace its second biggest industry overnight — and the global economy cannot recover quickly from the discretionary spend being removed.”

One respondent says although their industry is having to make huge changes due to Covid, it is providing the impetus to finally digitise and modernise — and the New Zealand economy will be better off in the long term because of it. “I’m optimistic we can actually come out of this with a fresh approach and a more knowledge-based economy if we play this right.”

But many recognise that despite New Zealand being a good position relative to many other parts of the world, the unpredictability of the coronavirus pandemic and long-term uncertainty means it will be a while until we can return to more optimistic levels.

“I suspect we are well shy of fully understanding the long-term economic impact of Covid and various political responses globally. We are quite exposed to political shifts in terms of trading and supply chain,” says a top recruiter.

The top six concerns are all Covid-related, although as Dame Alison Paterson points out: “In this uncertain environment, it is hard to assess. What is normal? In Covid alert levels three and four Auckland’s congestion disappears.”

“I am deeply concerned over the hopeless border, testing and isolation management we currently see that causes real concerns about the impact this may have on essential service workers and the ability to deliver these services,” says a CEO in the energy sector.

“Before focusing on being kind, let’s be competent.”

Deloitte CEO Thomas Pippos says “people are looking to the Government for a clearly articulated strategy that the population can get behind that will include changes to the existing policy settings.”

Beca CEO Greg Lowe says there needs to be a more co-ordinated effort to develop a plan that ensures we have a strong economy and achieve economic growth over the next three years “to generate government revenues that are sufficient to start repaying the debt incurred in this crisis”.

One of those looking for a clear strategy is an IT boss: “There do not appear to be any policies from the current Government for moving forward — there is no current plan that would provide any business person with any confidence whatsoever. Sprinkling money like confetti is a short-term unsustainable approach.”

But others are more upbeat, and say the Government and its agencies have been swift to respond in a way that has boosted confidence — particularly when compared to the response of other countries.

“The Government response has been incredibly thorough,” says a software CEO. “As a business owner, I feel very supported and that they’re moving mountains to provide support and keep us moving.”

Covid also features among the top rated international concerns — with the fear of further waves of the virus receiving a score of 8.22/10 and a slowdown in world trade growth due to fallout from the pandemic scoring 7.64/10.

“The challenges of the international environment are daunting and our ability to remain agile and leverage of New Zealand’s well-respected trading legacy cannot be underestimated in our response,” says Downer CEO Steve Killeen.

Powered by Flossie CEO Jenene Crossan proposes New Zealand leverage the Prime Minister’s celebrity on the world stage as part of our response.

“Jacinda Ardern is very highly respected due to her leadership style. Let’s use this to increase our exports — especially in the tech industry.”

Increased protectionism and trade wars also rates high in terms of concern at 7.71/10, as does the lack of international leadership at 7.49/10.

The a2 Milk Company CEO Pip Greenwood notes: “The escalating tensions between the US and China and Australia are of concern for us as a small export reliant nation.”

“Volatility in world trade markets — whether they be politically motivated or as a result of health responses — will inevitably impact New Zealand as an export trading nation,” says one CEO. “New Zealand must respond in an agile way to ensure our own national success.”

Mood of the boardroom: Seymour a single-handed success (NZ Herald)