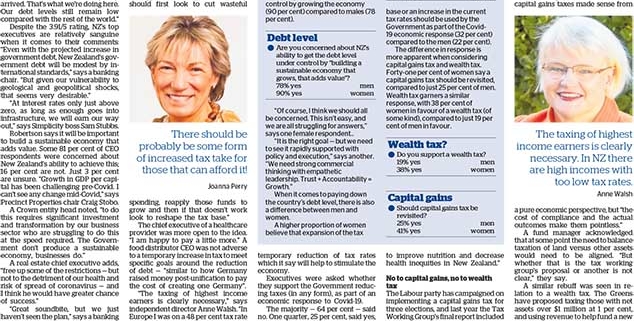 Chief executives are highly concerned over mounting government debt and forecast deficits as a result of dealing with the economic impact of Covid-19.

They scored the issue at 3.91/5 on a scale where 1=not concerned and 5=extremely concerned in the 2020 Mood of the Boardroom survey.

Finance Minister Grant Robertson has defended the increased debt: “The whole point of us saving for a rainy day, the fact that our Government kept net debt below 20 per cent, was to use it when the rainy day arrived. That’s what we’re doing here. Our debt levels still remain low compared with the rest of the world.”

Despite the 3.91/5 rating, NZ’s top executives are relatively sanguine  when it comes to their comments: “Even with the projected increase in government debt, New Zealand’s government debt will be modest by international standards,” says a banking chair. “But given our vulnerability to geological and geopolitical shocks, that seems very desirable.”

“At interest rates only just above zero, as long as enough goes into infrastructure, we will earn our way out,” says Simplicity boss Sam Stubbs.

Robertson says it will be important to build a sustainable economy that adds value. Some 81 per cent of CEO respondents were concerned about New Zealand’s ability to achieve this; 16 per cent are not. Just 3 per cent are unsure. “Growth in GDP per capital has been challenging pre-Covid. I can’t see any change mid-Covid,” says Precinct Properties chair Craig Stobo.

A Crown entity head noted, “to do this requires significant investment and transformation by our business sector who are struggling to do this at the speed required. The Government don’t produce a sustainable economy, businesses do.”

A real estate chief executive adds, “free up some of the restrictions — but not to the detriment of our health and risk of spread of coronavirus — and I think he would have greater chance of success.”

Others are less sceptical. A food industry executive says New Zealand has the ability to add much more value through its natural resources and services. “The challenge will be to act with speed!”

Respondents were asked if as part of the economic response to Covid-19, the Government should look to raise additional tax revenue through an expansion of the tax base or an increase in current rates (in any form).

The Labour Party has proposed increasing tax on the country’s highest two per cent of earners, with a new top tax rate of 39 per cent on earnings over $180,000.

Almost two-thirds — 65 per cent — oppose an increase in tax. But 25 per cent responded positively and 10 per cent are unsure. Of all the taxation questions, this one garnered the most responses from survey respondents, with most choosing to explain why they chose a “No” response: “Investment in growth is the only long-term answer and the opportunities are substantial,” says a food producer chief executive.

“We are going through a once-in-a-lifetime event, and should be prepared for a temporary increase in deficits to stimulate economic growth and then we have to transition to normalised settings of a balanced budget,” says a fund manager. “Tax should not be on the agenda for this year or next.”

Suggested a transport boss: “They should first look to cut wasteful spending, reapply those funds to grow and then if that doesn’t work look to reshape the tax base.”

The chief executive of a healthcare provider was more open to the idea. “I am happy to pay a little more.” A food distributor CEO was not adverse to a temporary increase in tax  to meet specific goals around the reduction of debt — “similar to how Germany raised money post-unification to pay the cost of creating one Germany”.

“The taxing of highest income earners is clearly necessary,” says independent director Anne Walsh. “In Europe I was on a 48 per cent tax rate to match my high income which allowed for this. In NZ there are high incomes with too low tax rates.”

“There should be probably be some form of increased tax take for those that can afford it!,” adds non-executive chair and director Joanna Perry.

“It depends where we are in the crisis response — debt should be paid down after that response not during it,” says Chapman Tripp’s chief executive partner Nick Wells.

Not a time for tax reduction

The National Party has abandoned its original debt target and proposed a temporary reduction of tax rates which it say will help to stimulate the economy.

Executives were asked whether they support the Government reducing taxes (in any form), as part of an economic response to Covid-19.

The majority — 64 per cent — said no. One quarter, 25 per cent, said yes, and 11 per cent were unsure. “We are not in a position to reduce tax revenue,” says Mainfreight CEO Don Braid. Adds an investment fund boss: “Current tax settings are largely conducive to fostering a growth mindset.”

A banking chair suggested there could be a temporary reduction in GST,  to encourage consumer spending in the short-term. Anne Walsh says “removing GST on fresh meat, fruit and vegetables may be a fast way to improve nutrition and decrease health inequities in New Zealand.”

No to capital gains, no to wealth tax

The Labour party has campaigned on implementing a capital gains tax  for three elections, and last year the Tax Working Group’s final report included a recommendation for one. But after failing to reach a consensus in Cabinet, Prime Minister Jacinda Ardern ruled out a CGT while she is Prime Minister.

The Tax Working Group projected revenue from a CGT would increase tax revenue by $400 million in the first year to $5.9 billion by 2030/31.

Executives were asked whether the current fiscal situation warrants the decision by the Prime Minister being revisited. The majority — 59 per cent said no, 30 per cent said yes, and 11 per cent were unsure.

“As I recall, most of the positive revenue projected for the CGT arose from the assumption property prices would continue to increase faster than general inflation,” says a banking chair. “Because of that I am dubious about the projected revenue gain.”

A banking chief executive said  capital gains taxes made sense from a pure economic perspective, but “the cost of compliance and the actual outcomes make them pointless.”

A fund manager acknowledged that at some point  the need to balance   taxation of land versus other assets would need to be aligned. “But whether that is the tax working group’s proposal or another is not clear,” they say.

A similar rebuff was seen in relation to  a wealth tax. The Greens have proposed taxing those with net assets over $1 million at 1 per cent, and using  revenue to help  fund a  new welfare policy that would guarantee weekly income of at least $325.

An overwhelming 76 per cent of CEOs do not support it, saying it would drive talent away from New Zealand and would be  difficult   to measure and implement. The remainder, some 24 per cent, would support a wealth tax, but many would want to see changes to the Greens’ proposal — such as materially higher thresholds than that proposed or a Covid sunset clause.

CEOs were asked if they believe NZ  First would moderate the tax rates if a Labour-Greens coalition government sought to raise them. A clear majority — 74 per cent — said Yes, 12 per cent said No, and 14 per cent said they were Unsure. But there was strong scepticism from respondents over whether that would eventuate:

“They need to hold the balance of power first,” says Stobo.

Mood of the Boardroom: Business call to action (NZ Herald)

Mood of the boardroom: Covid-19 restrictions are bordering on ridiculous (NZ...
Scroll to top