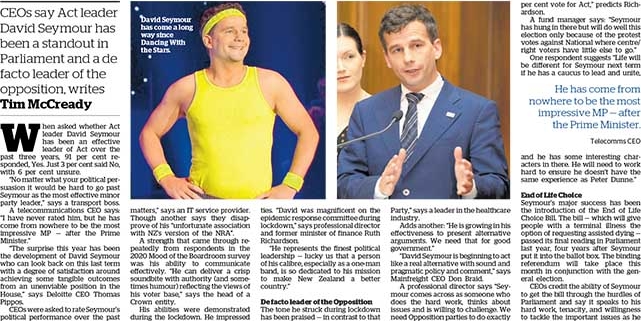 CEOs say Act leader David Seymour has been a standout in Parliament and a de facto leader of the opposition, writes Tim McCready

David Seymour has come a long way  since  Dancing With the Stars.

When asked whether Act leader David Seymour has been an effective leader of Act over the past three years, 91 per cent responded, Yes. Just 3 per cent said No, with 6 per cent unsure.

“No matter what your political persuasion it would be hard to go past Seymour as the most effective minor party leader,” says a transport boss.

A telecommunications CEO says: “I have never rated him, but he has come from nowhere to be the most impressive MP — after the Prime Minister.”

“The surprise this year has been the development of David Seymour who can look back on this last term with a degree of satisfaction around achieving some tangible outcomes from an unenviable position in the House,” says Deloitte CEO Thomas Pippos.

CEOs were asked to rate Seymour’s political performance over the past three years on a scale where 1= not impressive and 5= very impressive. He received a score of 4.03/5 — the highest of all minority political party leaders.

“David Seymour has been most impressive over the last year,” reckons Precinct Properties chair Craig Stobo.

“David Seymour continues to impress on a regular basis. He is not afraid to take a stand on controversial matters,” says an IT service provider. Though another says they disapprove of his “unfortunate association with NZ’s version of the NRA”.

A strength  that came through repeatedly from respondents in the 2020 Mood of the Boardroom survey was his ability to communicate effectively. “He can deliver a crisp soundbite with authority (and sometimes humour) reflecting the views of his voter base,” says the head of a Crown entity.

His  abilities were demonstrated during the lockdown. He impressed during the epidemic response committee hearings, praising   Prime Minister Jacinda Ardern for the initial response but also forensically examining aspects of the  response — including the management of data, issues with PPE, testing rates and contact tracing capabilities. Though  he was supportive of the lockdown, he opposed certain aspects — including the shutdown of Parliament —  and called for the allowance of safe activities. “David was magnificent on the epidemic response committee during lockdown,” says professional director and former minister of finance Ruth Richardson.

“He represents the finest political leadership — lucky us that a person of his calibre, especially as a one-man band, is so dedicated to his mission to make New Zealand a better country.”

De facto leader of the Opposition

The tone he struck during lockdown has been praised — in contrast to that of then-Opposition leader Simon Bridges — and led to some executives suggesting Seymour has become the de facto leader of the Opposition.

“David Seymour has really developed and thrived in this environment,” says a top winemaker. “He is concise, clear and asks questions that the Nats should.”

A real estate CEO reckons he “is a one-man leader of the Opposition.”

“He has shown up the Opposition Party,” says a leader in the healthcare industry.

Adds another: “He is growing in his effectiveness to present alternative arguments. We need that for good government.”

A professional director says “Seymour comes across as someone who does the hard work, thinks about issues and is willing to challenge. We need Opposition parties to do exactly that. ”

The recent 1 NEWS Colmar Brunton poll puts Act at 7 per cent (compared to the 2017 election result of 0.5 per cent), and indicates Seymour will return to Parliament with  an additional eight MPs.

“He is measured, constructive and principled and the voting public notice and appreciate — look for a 10 per cent vote for Act,” predicts  Richardson.

A fund manager says: “Seymour has hung in there but will do well this election only because of the protest votes against National where centre/right voters have little else to go.”

One respondent suggests “Life will be different for Seymour next term if he has a caucus to lead and unite, and he has some interesting characters in there.  He will need to work hard to ensure he doesn’t have the same experience as Peter Dunne.”

Seymour’s major success has been the introduction of the End of Life Choice Bill. The bill — which will give people with a terminal illness the option of requesting assisted dying — passed its final reading in Parliament last year, four years after Seymour put it into the ballot box. The binding referendum will take place this month in conjunction with the general election.

CEOs credit the ability of Seymour to get the bill through the hurdles of Parliament and say it speaks to his hard work, tenacity, and willingness to tackle the important issues as he seems them — and not “yoyo for political gain”.

“It has been an impressive outcome for the euthanasia bill,” says The Icehouse CEO Gavin Lennox.

“He has been willing to take a position when convinced that it was the correct position to take,” says a professional director. “This allowed him to successfully get the End of Life Choice Bill through Parliament — despite being only a single MP.”

Mood of the Boardroom: Top-rankers suffer from a spell of invisibility

Mood of the Boardroom: Covid-19 has cast a pall over CEO confidence
Scroll to top