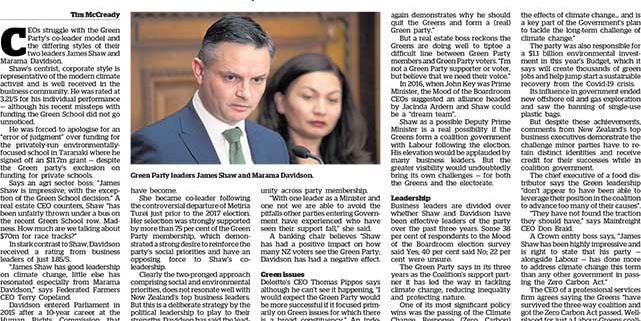 CEOs struggle with the Green Party’s co-leader model and the differing styles of their two leaders James Shaw and Marama Davidson.

Shaw’s centrist, corporate style is representative of the modern climate activist and is well received in the business community. He was rated at 3.21/5 for his individual performance — although his recent missteps with funding the Green School did not go unnoticed.

He was forced to apologise for an “error of judgment” over funding for the privately-run environmentally-focused school in Taranaki where he signed off an $11.7m grant — despite the Green party’s exclusion on funding for private schools.

Says an agri sector boss: “James Shaw is impressive, with the exception of the Green School decision.” A real estate CEO counters, Shaw “has been unfairly thrown under a bus on the recent Green School row. Madness. How much are we talking about $70m for race tracks?”

In stark contrast to Shaw, Davidson received a rating from business leaders of just 1.85/5.

Davidson entered Parliament in 2015 after a 10-year career at the Human Rights Commission that brought life to her activist and social justice foundations. She is reminiscent of the Green Party of old — not the slicker political machine they have become.

She became co-leader following the controversial departure of Metiria Turei just prior to the 2017 election. Her selection was strongly supported by more than 75 per cent of the Green Party membership, which demonstrated a strong desire to reinforce the party’s social priorities and have an opposing force to Shaw’s co-leadership.

Clearly the two-pronged approach  comprising social and environmental priorities, does not resonate well with New Zealand’s top business leaders. But this is a deliberate strategy by the political leadership to play to their strengths. Davidson has said the leadership split means she is able to focus on the party and ensure the full delivery of their confidence and supply agreement, while maintaining unity across party membership.

“With one leader as a Minister and one not we are able to avoid the pitfalls other parties entering Government have experienced who have seen their support fall,” she said.

A banking chair believes “Shaw has had a positive impact on how many NZ voters see the Green Party; Davidson has had a negative effect.

Deloitte’s CEO Thomas Pippos says although he can’t see it happening, “I would expect the Green Party would be more successful if it focused primarily on Green issues for which there is a broad constituency.” An independent chair was more on the nose, suggesting: “They are not Green. They are just diehard socialists.”

Another suggests “James Shaw again demonstrates why he should quit the Greens and form a (real) Green party.”

But a real estate boss reckons the Greens are doing well to tiptoe a difficult line between Green Party members and Green Party voters. “I’m not a Green Party supporter or voter, but believe that we need their voice.”

In 2016, when John Key was Prime Minister, the Mood of the Boardroom CEOs suggested an alliance headed by Jacinda Ardern and Shaw could be a “dream team”.

Shaw as a possible  Deputy Prime Minister is a real possibility if the Greens form a coalition government with Labour following the election. His elevation would be applauded by many business leaders. But the greater visibility would undoubtedly bring its own challenges — for both the Greens and the electorate.

Business leaders are divided over whether Shaw and Davidson have been effective leaders of the party over the past three years. Some 38 per cent of respondents to the  Mood of the Boardroom election survey said Yes; 40 per cent said No; 22 per cent were unsure.

The Green Party says in its three years as the Coalition’s support partner it has led the way in tackling climate change, reducing inequality and protecting nature.

One of its most significant policy wins was the passing of the Climate Change Response (Zero Carbon) Amendment Bill. The Greens say the landmark legislation “provides a framework to support New Zealanders to prepare for, and adapt to, the effects of climate change… and is a key part of the Government’s plan to tackle the long-term challenge of climate change.”

The party was also responsible for a $1.1 billion environmental investment in this year’s Budget, which it says will create thousands of green jobs and help jump start a sustainable recovery from the Covid-19 crisis.

Its influence in government ended new offshore oil and gas exploration and saw the banning of single-use plastic bags.

But despite these achievements, comments from New Zealand’s top business executives demonstrate the challenge minor parties have to retain distinct identities and receive credit for their successes while in coalition government.

The chief executive of a food distributor says the Green leadership “don’t appear to have been able to leverage their position in the coalition to advance too many of their causes”.

“They have not found the traction they should have,” says Mainfreight CEO Don Braid.

A Crown entity boss says, “James Shaw has been highly impressive and is right to state that his party — alongside Labour — has done more to address climate change this term than any other government in passing the Zero Carbon Act.”

The CEO of a professional services firm agrees saying the Greens “have survived the three-way coalition and got the Zero Carbon Act passed. Well-placed for just a Labour-Greens coalition at the election.”

Mood of the Boardroom: Greens’ wealth tax ‘too difficult to implement’...
Scroll to top