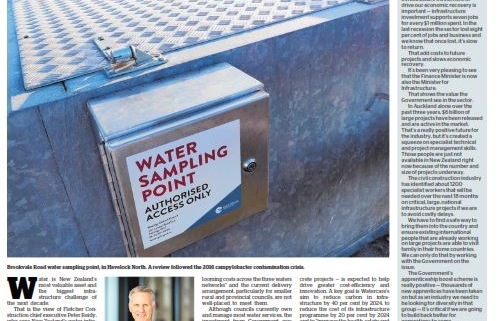 Water is New Zealand’s most valuable asset and the biggest infrastructure challenge of the next decade.

That is the view of Fletcher Construction chief executive Peter Reidy, who says New Zealand’s water infrastructure is well overdue for investment as pipes reach the end of their useful lives.

Reidy says that more than a third of wastewater treatment plants will require re-consenting within the next decade, and almost a quarter are operating on expired consents. Conservative estimates are that the cost of upgrades and renewals will be measured in billions of dollars.

“The public’s environmental expectations are also increasing and the consequences of climate change, including more frequent and more intense droughts, require urgent attention,” he says.

Over the past three years, central and local government have been considering how to address the challenges facing delivery of three waters services (drinking water, wastewater, stormwater) to communities. The review followed the 2016 Havelock North campylobacter contamination crisis that exposed systemic issues in the regulation and provision of three waters.

The result has been the establishment of Taumata Arowai as a Crown water regulatory body to administer and enforce a drinking water regulatory framework, with additional oversight on improving the environmental performance of wastewater and stormwater networks.

In July this year, as part of the Covid-19 stimulus, the Government announced $761 million in funding to maintain and improve three waters infrastructure and to support the reform of local government water services delivery arrangements.

At the funding announcement, Local Government Minister Nanaia Mahuta said there are “massive looming costs across the three waters networks” and the current delivery arrangement, particularly for smaller rural and provincial councils, are not well-placed to meet them.

Although councils currently own and manage most water services, the investment from Government was made contingent on local councils opting in to the government’s wider reform programme.

Fletcher Construction supports the Government’s plans to reform the way we manage water.

“At the end of the day it is all about customers — improving environmental standards, value for money and productivity for customers,” says Reidy. “Having water utilities at scale will also allow for greater investment in digital solutions to water.”

In September, Fletcher Construction along with Fulton Hogan signed a $2.4 billion contract with Auckland Council-owned Watercare Services for the delivery of water and wastewater infrastructure for Auckland over the next 10 years.

Reidy says the 10-year partnership with Watercare was secured under a new enterprise model which has audacious cost and sustainability goals. “This is a transformational model of partnership built around carbon reduction, safety improvements and cost savings that challenged our team to collaborate across their specialty areas,” he says. “Watercare has changed the way it partners and that has stimulated Fletcher Construction to respond in a way that puts safety, sustainability and innovation at the core of our model.”

Reidy says it is that kind of model that could work across the country.

“With Wellington Water we are also offering more than just a straight subcontractor model. And that’s because real progress can be made when deliverers are embedded within planning and project teams.”

Reidy says the Government has started this conversation, but we all need to collaborate together to find the solutions. “That’s critical for our cities, our waterways and our people,” he says.