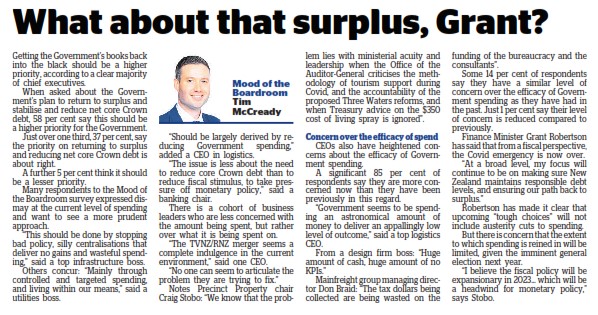 Getting the Government’s books back into the black should be a higher priority, according to a clear majority of chief executives.

When asked about the Government’s plan to return to surplus and stabilise and reduce net core Crown debt, 58 per cent say this should be a higher priority for the Government.

Just over one third, 37 per cent, say the priority on returning to surplus and reducing net core Crown debt is about right. A further 5 per cent think it should be a lesser priority.

Many respondents to the Mood of the Boardroom survey expressed dismay at the current level of spending and want to see a more prudent approach.

“This should be done by stopping bad policy, silly centralisations that deliver no gains and wasteful spending,” said a top infrastructure boss.

Others concur: “Mainly through controlled and targeted spending, and living within our means,” said a utilities boss.

“Should be largely derived by reducing Government spending,” added a CEO in logistics.

“The issue is less about the need to reduce core Crown debt than to reduce fiscal stimulus, to take pressure off monetary policy,” said a banking chair.

There is a cohort of business leaders who are less concerned with the amount being spent, but rather over what it is being spent on.

“The TVNZ/RNZ merger seems a complete indulgence in the current environment,” said one CEO.

“No one can seem to articulate the problem they are trying to fix.”

Notes Precinct Property chair Craig Stobo: “We know that the problem lies with ministerial acuity and leadership when the Office of the Auditor-General criticises the methodology of tourism support during Covid, and the accountability of the proposed Three Waters reforms, and when Treasury advice on the $350 cost of living spray is ignored”.
Concern over the efficacy of spend CEOs also have heightened concerns about the efficacy of Government spending.

A significant 85 per cent of respondents say they are more concerned now than they have been previously in this regard.

“Government seems to be spending an astronomical amount of money to deliver an appallingly low level of outcome,” said a top logistics CEO.

Mainfreight group managing director Don Braid: “The tax dollars being collected are being wasted on the funding of the bureaucracy and the consultants”.

Finance Minister Grant Robertson has said that from a fiscal perspective, the Covid emergency is now over.

“At a broad level, my focus will continue to be on making sure New Zealand maintains responsible debt levels, and ensuring our path back to surplus.”

Robertson has made it clear that upcoming “tough choices” will not include austerity cuts to spending.

But there is concern that the extent to which spending is reined in will be limited, given the imminent general election next year.

“I believe the fiscal policy will be expansionary in 2023… which will be a headwind for monetary policy,” says Stobo.

Mood of the Boardroom: Christopher Luxon breathes new life into the party (NZ...
Scroll to top