When I arrived in London, I asked several of my London-born friends if they had visited every station on the London Underground. Once they finished laughing at me, they told me they hadn’t  And that it was a ridiculous idea. Which only made me more determined to do it.

The world record for passing through each station (without getting off the train) is 16.5 hours. There are near weekly attempts to beat this record, so I couldn’t help but feel an attempt at the record was futile. Besides, the stations are what interested me.

I thought it would be far more interesting (and yet to be done), to get off at each platform, and get a photo taken next to the station name. This meant that I saw some fascinating things on my journey, and spotted interesting anomalies at each station. It also meant that I needed to get out at each stop, take a picture, and wait for the next train, which took a minimum of two minutes, and in some cases up to 40 minutes. In addition to this, my idea of creating a stop motion animation of my movements once the photos were placed in alphabetical order meant that I had to carry a fairly sophisticated spreadsheet with me – to tell me where I should be standing and what I needed to be wearing, holding, and doing at each station. Altogether it took about 50 hours to complete, spread over seven (non-consecutive!) days. You can view the finished video below.

My story has been featured as part of the London Underground’s 150th anniversary celebrations on the BBC, CNN, London’s Evening Standard, The New Zealand Herald, and Italian media. 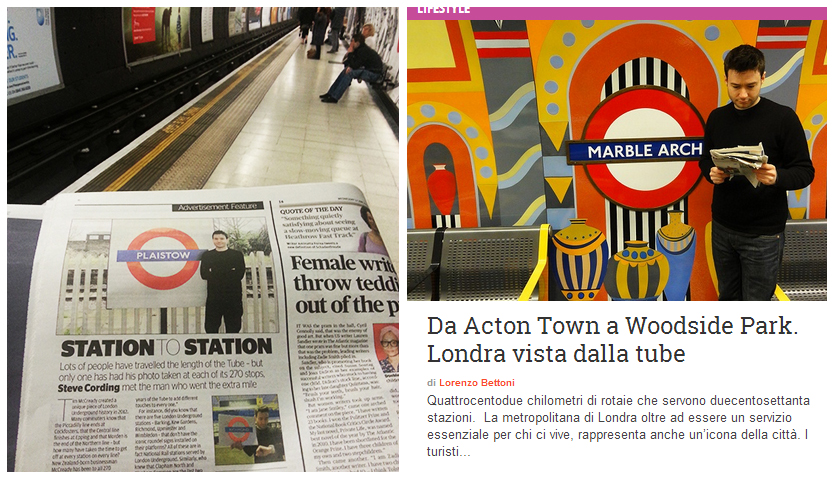 Spending 50 hours on the London Underground meant that I experienced a lot. Some of the more memorable moments include: