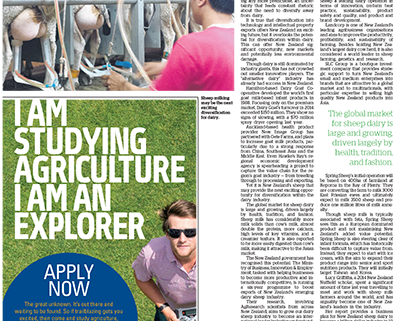 Sheep milk products may become a Holy Grail as the agricultural industry continues to diversify, writes Tim McCready.
Dairy diversification is a very New Zealand preoccupation, and with good reason. Dairy prices are not becoming any more predictable, an uncertainty that feeds constant rhetoric about the need to diversify away from dairy.

It is true that diversification into technology and intellectual property exports offers New Zealand an exciting future, but it overlooks the potential for diversification within dairy. This can offer New Zealand significant opportunity, new markets and potentially less environmental damage.

Though dairy is still dominated by industry giants, this has not crowded out smaller innovative players. The “alternative dairy” industry has already had success in New Zealand.

Auckland-based health product provider New Image Group has partnered with Oete Farms, and plans to increase goat milk products, particularly due to a strong response from China, Southeast Asia and the Middle East. Even Hawke’s Bay’s regional economic development agency is spearheading a project to capture the value chain for the region’s goat industry — from breeding through to processing and exporting.

Yet it is New Zealand’s sheep that may provide the next exciting opportunity for diversification within the dairy industry.

The global market for sheep dairy is large and growing, driven largely by health, tradition, and fashion. Sheep milk has considerably more milk solids than cow’s milk, almost double the protein, more calcium, high levels of key vitamins, and a creamier texture. It is also reported to be more easily digested than cow’s milk, making it attractive to the Asian market.

The New Zealand government has recognised this potential. The Ministry of Business, Innovation & Employment, tasked with helping businesses to become more productive and internationally competitive, is running a six-year programme to boost exports of New Zealand’s emerging dairy sheep industry.

Their research, involving AgResearch scientists from across New Zealand, aims to grow our dairy sheep industry to become an international leader by better understanding sheep milk composition and function, boosting production and value, and ensuring the environmental footprint of the industry is sustainable.

New Zealand’s dairy sheep industry is already reasonably established, with five commercial operations, but there are signs it can expand and innovate further still.

On top of this, New Zealand’s sixth commercial sheep dairy operation was announced last month. Spring Sheep Dairy is a 50/50 partnership of SLC Group and State-owned enterprise Landcorp, and has ambitions to lead this field.

Landcorp is one of New Zealand’s leading agribusiness organisations and aims to improve the productivity, profitability, and sustainability of farming. Besides holding New Zealand’s largest dairy cow herd, it is also considered a world leader in sheep farming, genetics and research.

SLC Group is a boutique investment company that provides strategic support to turn New Zealand’s small and medium enterprises into brands that are attractive to a global market and to multinationals, with particular expertise in selling high quality New Zealand products into Asia.

Spring Sheep’s initial operation will be based on 400ha of farmland at Reporoa in the Bay of Plenty. They are converting the farm to milk 3000 East Friesian ewes and ultimately expect to milk 3500 sheep and produce one million litres of milk annually.

Though sheep milk is typically associated with feta, Spring Sheep sees this as a European dominated product and not maximising New Zealand’s added value potential. Spring Sheep is also steering clear of infant formula, which has historically been difficult to capture value from. Instead, they expect to start with ice cream, with the aim to expand their product range into senior and sport nutrition products. They will initially target Taiwan and Korea.

Lucy Griffiths, a 2014 New Zealand Nuffield scholar, spent a significant amount of time last year travelling to meet and work with sheep milk farmers around the world, and has arguably become one of New Zealand’s leaders in the industry.

Her report provides a business plan for New Zealand sheep dairy to become a billion dollar industry in 10 years’ time.

Griffiths can see the sheep industry offering New Zealand massive opportunity. “When I met with leading industry experts in the Middle East, Afimilk, they pointed out that the return on investment for sheep dairy is five years on average, versus 20 years for dairy cows. Sheep dairy could also provide a more viable return for the land and reduce the environmental impact at the same time.”

But Griffiths noted: “If New Zealand wants to position itself as a leader, we must be market-led and offer a point of difference from other large global producers.”

Na Kyung-won, Chairperson of the Foreign Affairs and Unification Committee of the National Assembly, posed the question: What is North Korea for South Korea? Her response – “On the one hand, a serious security threat, but on the other hand, a partner with which we have to work together on the way leading to the unification of Korea.” This stance isn’t surprising – the requirement to seek peaceful unification is included in the South Korean Constitution.

South Korea established a Ministry of Reunification in 1998, which works to establish North Korean policy, coordinate inter-Korean dialogue, pursue inter-Korean cooperation, and educate the public on unification. In Korea there is an old saying, ‘ten years can change even the rivers and the mountains.’ However any progress on reunification to date has been largely non-existent.

From 2000 until 2008 liberal governments in South Korea put in place the Sunshine Policy under the leadership of President Kim Dae Jung. The policy resulted in greater political contact between the two countries, two Korean summit meetings in Pyongyang, several business ventures and brief meetings of some Korean families separated by the Korean War.

Kim Dae Jung was awarded the Nobel Peace Prize in 2000 for his successful implementation of the Sunshine Policy. However, following nuclear and missile tests and the shooting of a South Korean tourist at the Mount Kumgang Tourist Region, the Sunshine Policy was deemed a failure and wound up in 2010. The Sunshine Policy is dead, and so are the key players on both sides.

Sadly there are an estimated 6,700 people from separated families living in South Korea. The tragedy of the division is most prominently seen through those people who have not seen, spoken to, or even sent letters to their family members. Those people with the closest ties to the North are getting very old. Koreans, who are extremely family-centric, are very conscious of the fact that there is not much time left. The older generation passionately long for reunification, and believe it is imminent. Younger Korean’s seem to be agnostic about the prospect and worry about the economic cost.

Aside from reuniting disrupted families, South Korean government officials frequently spoke about ‘hitting the jackpot’, or the ‘bonanza’ that would come with reunification. The Korean Peninsula would be thrust into the role of an Asian hub. China, the world’s second largest economy lies to the West. Japan to the East is the world’s third largest. The virtual island of South Korea that is so evident from nighttime satellite photos would become connected through rail, road, and pipelines through to Eurasia.

On the flipside, Andrew Salmon, an author and high-profile journalist based in Seoul had a more pessimistic stance. He noted that if you look at North Korea through only the lens of the leadership, nothing much has changed. His view is that the most exciting and underreported story in Asia is that North Korea is becoming a de facto capitalist state.

During the 1990s North Korea suffered from horrific famine. The State distribution system imploded and North Korea had no choice but to go across the border to China, start trading, and run primitive markets. These markets have not gone away and have instead expanded nationwide to the extent that you can now buy almost anything – food, consumer goods, even electronics. Instead of North Korean currency the traders use international currencies and communicate with each other to set exchange rates. While it may be primitive and unofficial, for the first time in history change is coming from the bottom up.

The Kaesong Industrial Zone was established and is run by the South Koreans. While it has been open for ten years, there are only 123 small South Korean companies operating there and is unlikely to get any bigger. The original plan was for this to be the first step for South Korea’s economic recolonisation.

On the flipside, North Korea are establishing additional special economic zones. They are seeking foreign trade and investment, with China moving in very aggressively. The Rason special economic zone is in the far northeast bordering Russia and China and serves as a warm-water port for both countries. Foreign currency is permitted, and there are no poor people there.

Salmon’s view is that there is some hope in the future. But it doesn’t lie in the hands of the generals, the politicians, or the diplomats. It is up to business leaders. The Sunshine Policy wasn’t instigated by a politician, but by Chung Ju-yung – the founder of Hyundai conglomerate. Salmon argued that South Korea needs to get rid of sanctions that prevent any trade or investment in the North outside the artificial Kaesong Industrial Zone and stop the incessant focus on denuclearization – because it won’t happen. He argued that we should instead separate business from politics so that we can all have a stake in the North Korean economy.

As a country that assisted in the Korean War, I was invited to take part in a panel discussion on reunification, and share lessons that could be learnt from a New Zealand perspective. With speakers from powerful economies of Russia, China, the UK and South Korea, this was formidable, but the Korean’s were interested in hearing about New Zealand’s much admired strong relationships with nations around the world.

Reflecting on Korean reunification from a New Zealand perspective, our close partnership with Australia in particular offers a number of lessons instructive to prospects for such a future partnership between North and South Korea.

Despite our entwined history and combined military efforts, it would be fair to say that our relationship with Australia has remained strong due to our successful economic and trading partnership. Although the countries have their differences – cultural, political, nuclear, and commercial – they both represent an important trading partner to the other, supported by what is often referred to as “the world’s most comprehensive, effective, and mutually compatible free trade agreement”.

New Zealand’s close relationship has endured with Australia because we are stronger together. If New Zealand can share something with the world, it is that careful navigation of trade issues is something that can strengthen relationships, and over time build trust.

Word from the officials is that unification will be a jackpot not only in Korea, but for the rest of the world. Whether that is right or wrong, a divided Korea is a very sad reality. Progress has been slow, but ultimately the key to resolving conflict and division on the Korean Peninsula will come down to demonstrating that the interest in reunification is mutual and that benefits long term will extend the potential – for both economies.

First time on Korean TV – spoke about NZ’s involvement in the Korean war & the UN Cemetery in Busan pic.twitter.com/gHPOllvFhw