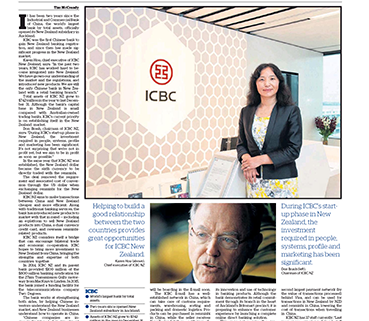 It has been two years since the Industrial and Commercial Bank of China, the world’s largest bank by total assets, officially opened its New Zealand subsidiary in Auckland.

ICBC was the first Chinese bank to gain New Zealand banking registration, and since then has made significant progress in the New Zealand market.

Karen Hou, chief executive of ICBC New Zealand, says: “In the past two years, ICBC has worked hard to become integrated into New Zealand. We have grown our understanding of the market and the regulations, and introduced new products. We are still the only Chinese bank in New Zealand with a retail banking branch.”

Total assets of ICBC NZ grew to $742 million in the year to last December 31. Although the bank’s capital base in New Zealand is small compared with Australian-owned trading banks, ICBC’s current priority is on establishing itself in the New Zealand market.

Don Brash, chairman of ICBC NZ, says: “During ICBC’s start-up phase in New Zealand, the investment required in people, systems, profile and marketing has been significant. It’s not surprising that we’re not in profit yet, but we aim to be in profit as soon as possible.”

In the same year that ICBC NZ was established, the New Zealand dollar became the sixth currency to be directly traded with the renminbi.

The deal removed the requirement and associated cost of conversion through the US dollar when exchanging renminbi for the New Zealand dollar.

ICBC NZ aims to make transactions between China and New Zealand cheaper and more efficient. Along with traditional banking services, the bank has introduced new products to market with that in mind – including an e-platform to sell New Zealand products into China, a dual currency credit card, and overseas renminbi-related products.

ICBC NZ considers itself a bridge that can encourage bilateral trade and economic co-operation. ICBC hopes to bring more investment to New Zealand from China, bringing the strengths and expertise of both countries together.

In 2014, ICBC NZ and its parent bank provided $100 million of the $800 million banking syndication for the 27km Transmission Gully motorway from MacKays to Linden. In 2015, the bank joined a funding facility for the telecommunications company Two Degrees.

The bank works at strengthening both sides, by helping Chinese investors understand the New Zealand market, and New Zealand businesses understand how to operate in China.

“Chinese companies are increasingly interested in investment opportunities in the New Zealand market. Helping to build a good relationship between the two countries provides great opportunities for ICBC New Zealand. We can help investors understand the market and how to be successful here,” Hou says.

ICBC group established its own e-commerce platform, “E-mall”, in January 2014. Since then, the number of globally registered customers has increased to over 31 million, turnover has reached more than $200 billion and transaction volumes place it among China’s top two e-commerce platforms by the end of last year.

The NZ pavilion of the E-mall was launched in November and allows reputable New Zealand companies to sell directly into the Chinese market through a secure sales channel.

Since the NZ pavilion of the E-mall went live in New Zealand, ICBC NZ has facilitated more than 4000 transactions on the platform.

Leveraging the increasing demand from Chinese consumers for high quality, safe products, the majority of items on the New Zealand pavilion are New Zealand food, personal healthcare products, cosmetic products and snacks. More and more quality New Zealand-made products will be boarding in the E-mall soon.

The ICBC E-mall has a well-established network in China, which can take care of customs requirements, warehousing, sorting and packing and domestic logistics. Products can be purchased in renminbi in China, while the seller receives New Zealand dollars – with immediate and direct NZD/RMB settlement.

This innovation opens New Zealand manufacturers up to a potentially enormous customer demand, especially now that China has overtaken the US to become the world’s largest e-commerce market. This is expected to continue with China’s strong domestic consumption and rapid urbanisation.

One of ICBC NZ’s key retail growth areas is its mortgage business. Over the two years in which the bank has been operating in New Zealand, customer numbers have grown substantially, and the value of home loans has also grown substantially.

ICBC is known internationally for its innovation and use of technology in banking products. Although the bank demonstrates its retail commitment through its branch in the heart of Auckland’s Britomart precinct, it is preparing to enhance the customer experience by launching a complete online direct banking solution.

This may not require the customers to visit the bank, instead replicating the traditional banking experience online – right through to opening a bank account. In addition, the online banking system is able to do cross-border remittance all over the world.

“Creativity and innovation are both very important to ICBC,” Hou says. “New Zealand is an innovative country. The bank wants to learn more from this market, so that we can adapt and launch products and technology here that will be of value to our customers.”

ICBC NZ was the first bank in the Southern Hemisphere to offer the UnionPay credit card. UnionPay is the second largest payment network (by the value of transactions processed) behind Visa, and can be used for transactions in New Zealand by NZD and renminbi in China, lowering the cost of transactions when travelling in China.

ICBC NZ has 37 staff currently. “Last year, more experienced local staff joined us and they are playing very important roles in our business and helping us to understand local regulations and the local market,” Hou says.

As ICBC New Zealand moves past the start-up phase, it has ambitious plans for the next two years. To manage growth, the bank will need more experienced staff. Reaffirming ICBC’s commitment to New Zealand, Hou aims to recruit new staff locally.

“We are very excited about the next phase of growth for ICBC NZ,” Brash says. “Although ICBC NZ has only been here two years, we can already see the opportunities ahead of us are very substantial.” 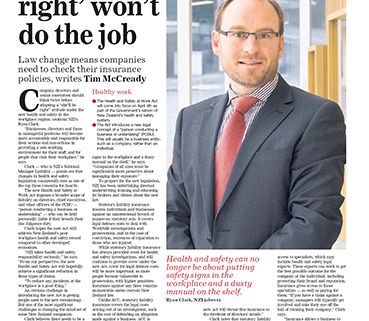 Company directors and senior executives should think twice before adopting a “she’ll be right” attitude under the new health and safety in the workplace regime, cautions NZI’s Ryan Clark.

“Businesses, directors and those in managerial positions will become more accountable and responsible for their actions and non-actions in providing a safe working environment for their staff, and for people that visit their workplace,” he says.

Clark – who is NZI’s National Manager Liability – points out that changes in health and safety legislation consistently rate as one of the top three concerns for boards.

The new Health and Safety at Work Act imposes a broader scope of liability on directors, chief executives, and other officers of the PCBU – “person conducting a business or undertaking” – who can be held personally liable if they breach their due diligence duty.

“NZI takes health and safety responsibility seriously,” he says. “From our perspective, the new Health and Safety Act will hopefully achieve a significant reduction in these types of claims.

“To reduce any incidents at the workplace is a good thing.”

An obvious challenge in introducing the new Act is getting people used to the new terminology. But one of the most significant challenges is changing the mind-set of some New Zealand companies.

Clark believes there needs to be a change away from a “she’ll be right” attitude, towards an understanding that directors and companies must provide a safe environment for their employees, and that the new Act has consequences.

While many larger companies have brought in consultants to review their health and safety processes, Clark notes that changing the attitude of small- to medium-sized businesses will be particularly important.

“The most important thing for New Zealand companies or boards to appreciate is that health and safety can no longer be about putting safety signs in the workplace and a dusty manual on the shelf,” he says. “Companies of all sizes must be significantly more proactive about managing their exposure.”

To prepare for the new legislation, NZI has been undertaking internal underwriting training and educating its brokers and clients about the new law.

It covers legal defence costs to deal with WorkSafe investigations and prosecutions, and in the case of conviction, sentences of reparation to those who are injured.

While statutory liability insurance has always provided cover for health and safety investigations, and will continue to provide cover under the new Act, cover for legal defence costs will be more important, as more people become vulnerable to prosecution, with higher penalties.

Unlike ACC, statutory liability insurance covers the legal costs arising out of an investigation, such as the cost of defending an allegation made against a business.

ACC is capped at 80 per cent of lost earnings, and the Sentencing Amendment Act 2014 means the Courts are now able to enforce reparation orders to top up this shortfall, as well as recover medical bills and loss of benefits.

Unlike ACC, an insurance policy is capped only at the level of insurance a business purchases.

“Many New Zealand companies already have statutory liability insurance, but it is often only considered a bolt-on, with not much thought put into it,” says Clark.

“As the policy covers not only companies, but directors as well, I am sure the new Act will thrust this insurance to the forefront of directors’ minds.”

Clark notes that statutory liability has historically been underinsured. Companies may take $250,000 or $500,000 limits, but when taking the new Act into consideration, this would probably be significant underinsurance.

Clark encourages companies to give careful consideration as to whether they have the right insurance policies in place. Defending a prosecution for a workplace injury can be expensive and time consuming, and has the potential to adversely affect the ongoing viability of a business.

Statutory insurance can provide access to specialists, which may include health and safety legal experts. These experts can work to get the best possible outcome for the company or the individual, including protecting their brand and reputation.

Insurance gives access to those specialists – as well as paying for them. “If you have a claim against a company, managers will typically get involved and take their eye off the ball of running their company,” Clark says.

“Insurance allows a business to not only get access to those specialists, but to transfer the financial expenditure to the insurer’s balance sheet – not theirs. Management can get on with running the business, and minimise the time they are distracted.”

The changes are not expected to result in an immediate jump in insurance premiums. Any future increases will likely be reactive rather than proactive.

It will depend on how the regulators use their new authority and regulatory tools, and how much of an example they make of New Zealand companies.