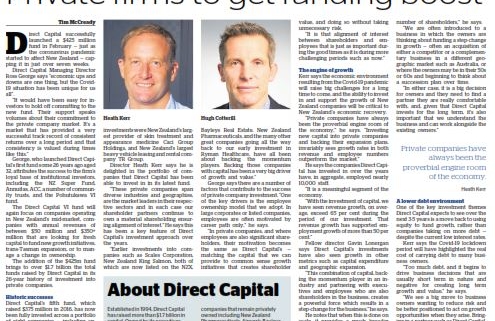 Direct Capital successfully launched a $425 million fund in February — just as the coronavirus pandemic started to affect New Zealand — capping it in just over seven weeks.

Direct Capital Managing Director Ross George says “economic ups and downs are one thing, but the Covid-19 situation has been unique for us all”.

“It would have been easy for investors to hold off committing to the new fund. Their support speaks volumes about their commitment to the private company market. It’s a market that has provided a very successful track record of consistent returns over a long period and that consistency is valued during times like this.”

George, who launched Direct Capital’s first fund some 26 years ago aged 32, attributes the success to the firm’s loyal base of institutional investors, including the NZ Super Fund, Annuitas, ACC, a number of community trusts, and the Pohutukawa VI fund.

The Direct Capital VI fund will again focus on companies operating in New Zealand’s mid-market, companies with annual revenues of between $50 million and $350+ million that are looking for fresh capital to fund new growth initiatives, trans-Tasman expansion, or to manage a change in ownership.

The addition of the $425m fund brings to over $1.7 billion the total funds raised by Direct Capital in its 26-year history of investment into private companies.

Director Heath Kerr says he is delighted in the portfolio of companies that Direct Capital has been able to invest in in its latest fund.

“These private companies span diverse industries and geographies, are the market leaders in their respective sectors and in each case our shareholder partners continue to own a material shareholding ensuring alignment of interest.” He says this has been a key feature of Direct Capital’s investment approach over the years.

“Earlier investments into companies such as Scales Corporation, New Zealand King Salmon, both of which are now listed on the NZX, Bayleys Real Estate, New Zealand Pharmaceuticals, and the many other great companies going all the way back to our early investment in Ryman Healthcare, have all been about backing the momentum players. Backing those companies with capital has been a very big driver of growth and value.”

George says there are a number of factors that contribute to the success of private company investment. “One of the key drivers is the employee ownership model that we adopt. In large corporates or listed companies, employees are often motivated by career path only,” he says.

“In private companies, and where employees are also significant shareholders, their motivation becomes the same as Direct Capital’s — matching the capital that we can provide to common sense growth initiatives that creates shareholder value, and doing so without taking unnecessary risk.

“It is that alignment of interest between shareholders and employees that is just as important during the good times as it is during more challenging periods such as now.”

The engine of growth

Kerr says the economic environment resulting from the Covid-19 pandemic will raise big challenges for a long time to come, and the ability to invest in and support the growth of New Zealand companies will be critical to New Zealand’s economic recovery.

“Private companies have always been the proverbial engine room of the economy,” he says. “Investing new capital into private companies and backing their expansion plans, invariably sees growth rates in both revenue and employee numbers outperform the market.”

He says the companies Direct Capital has invested in over the years have, in aggregate, employed nearly 10,000 staff.

“It is a meaningful segment of the economy.

“With the investment of capital, we have seen revenue growth, on average, exceed 65 per cent during the period of our investment. That revenue growth has supported employment growth of more than 50 per cent.”

“This combination of capital, backing the momentum player in an industry and partnering with executives and employees who are also shareholders in the business, creates a powerful force which results in a step-change for the business,” he says.

He notes that when this is done on scale, it provides a much broader benefit to the economy.

Hugh Cotterill, who joined the firm in 2019, says a key factor in the firm’s success has been the strong relationship developed between Direct Capital and its partner shareholders.

“Private companies are typically family owned or owned by a small number of shareholders,” he says.

“We are often introduced to a business in which the owners are thinking about funding a step-change in growth — often an acquisition of either a competitor or a complementary business in a different geographic market such as Australia, or where the owners may be in their 50s or 60s and beginning to think about a succession plan over time.

“In either case, it is a big decision for owners and they need to find a partner they are really comfortable with, and, given that Direct Capital invests for the long term, it’s also important that we understand the business and can work alongside the existing owners.”

One of the key investment themes Direct Capital expects to see over the next 3-5 years is a move back to using equity to fund growth, rather than companies taking on more debt — despite the current low interest rates.

Kerr says the Covid-19 lockdown period will have highlighted the real cost of carrying debt to many business owners.

“Too much debt, and it begins to drive business decisions that are usually short term in nature and negative for creating long term growth and value,” he says.

“We see a big move to business owners wanting to reduce risk and be better positioned to act on growth opportunities when they arise. Bringing in a partner such as Direct Capital, reducing debt and providing the capital that can enable growth, is a great way of achieving that.”

With a capital pool of $425 million to invest, Direct Capital says it expects the vibrant private company market to continue its success and for the firm to play its part in helping New Zealand’s economic recovery in the years ahead.

Capital Markets: Lessons and trends from the pandemic (NZ Herald)
Scroll to top