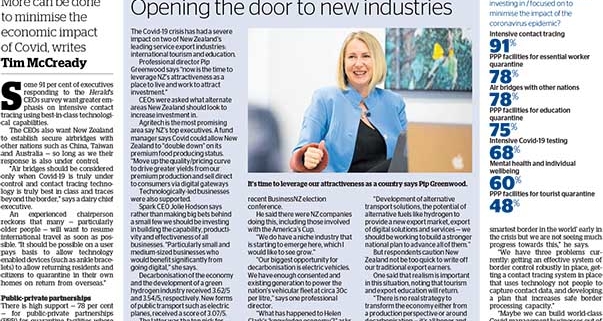 More can be done to minimise the economic impact of Covid, writes Tim McCready

The CEOs also want New Zealand to establish secure airbridges with other nations such as China, Taiwan and Australia — so long as we their response is also under control.

“Air bridges should be considered only when Covid-19 is truly under control and contact tracing technology is truly best in class and traces beyond the border,” says a dairy chief executive.

An experienced chairperson reckons that many — particularly older people — will want to resume international travel as soon as possible. “It should be possible on a user pays basis to allow technology-enabled devices (such as ankle bracelets) to allow returning residents and citizens to quarantine in their own homes on return from overseas.”

There is high support — 78 per cent — for public-private partnerships (PPP) for quarantine facilities where essential workers can be quarantined at their company’s cost. PPP isolation facilities for international education students were backed by 75 per cent of respondents; a much higher level of support than PPP isolation facilities for international tourists — only 48 per cent of respondents said that should be a focus.

“The tourist isolation facility idea is similarly impracticable because tourists are unlikely to want to come to NZ and stay in such a facility for 14 days at their expense (not much of a holiday),” says a legal firm boss. “Isolation facilities for students sound good in theory but the numbers involved would make this impracticable.”

Some questioned NZ’s reliance on export education as an economic driver.

“How much was international education just a feeder to the incredibly high immigration levels over the past ten years?,” asks a property boss.

“I really think we have to critically examine this sector’s contribution — painful as that might be.”

A lobbyist believes PPPs would alleviate some of the constraints around capacity.

“Our Ministry of Health isn’t up to handling this pandemic, they have dropped the ball so many times and are very economical with the truth. A future inquiry will not be pretty for some who we rate very highly now.”

Beca Group CEO Greg Lowe emphasised the pandemic is not a short-term problem, calling for a “smart” approach to a safe border. “The Prime Minister called for ‘the smartest border in the world’ early in the crisis but we are not seeing much progress towards this,” he says.

“We have three problems currently: getting an effective system of border control robustly in place, getting a contact tracing system in place that uses technology not people to capture contact data, and developing a plan that increases safe border processing capacity.”

“Government-run facilities have had their challenges, and they’re just the issues you get when you need tens of thousands of people to follow processes where, if it goes wrong, people die,” says a real estate boss. “Add the inherent risk of lots of people and processes to a profit motive and I just can’t see the Melbourne situation not happening again.”

Opening the door to new industries

The Covid-19 crisis has had a severe impact on two of New Zealand’s leading service export industries: international tourism and education.

Professional director Pip Greenwood says “now is the time to leverage NZ’s attractiveness as a place to live and work to attract investment.”

CEOs were asked what alternate areas New Zealand should look to increase investment in.

Agritech is the most promising area say NZ’s top executives. A fund manager says Covid could allow New Zealand to “double down” on its premium food producing status. “Move up the quality/pricing curve to drive greater yields from our premium products and sell direct to consumers via digital gateways.

Spark CEO Jolie Hodson says rather than making big bets behind a small few we should be investing in building the capability, productivity and effectiveness of all businesses. “Particularly small and medium-sized businesses who would benefit significantly from going digital,” she says.

Decarbonisation of the economy and the development of a green hydrogen industry received 3.62/5 and 3.54/5, respectively. New forms of public transport such as electric planes, received a score of 3.07/5.

The latter was the top pick for Green co-leader James Shaw at the recent BusinessNZ election conference.

He said there were NZ companies doing this, including those involved with the America’s Cup.

“We do have a niche industry that is starting to emerge here, which I would like to see grow.”

“Our biggest opportunity for decarbonisation is electric vehicles. We have enough consented and existing generation to power the nation’s vehicular fleet at circa 30c per litre,” says one professional director.

“Development of alternative transport solutions, the potential of alternative fuels like hydrogen to provide a new export market, export of digital solutions and services — we should be working to build a stronger national plan to advance all of them.”

But respondents caution New Zealand not be too quick to write off our traditional export earners.

One said that realism is important in this situation, noting that tourism and export education will return.

“There is no real strategy to transform the economy either from a production perspective or around decarbonisation — it’s all hopes and dreams stuff currently.”

Capital Markets: Lessons and trends from the pandemic (NZ Herald)

Mood of the Boardroom: Top-rankers suffer from a spell of invisibility
Scroll to top